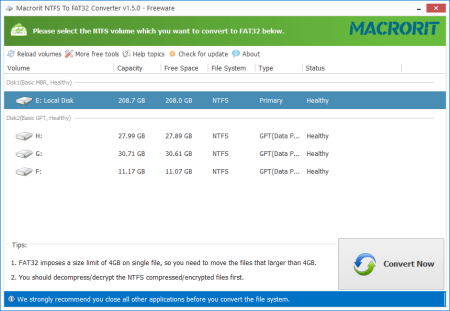 With Windows built-in Disk Management, FAT32 can be converted to NTFS but it is not so easy to convert NTFS back to FAT32.

What's more, if your NTFS partition is larger than 32GB or contains sensitive data, the conversion or formatting task will become more difficult.
Safely convert NTFS to FAT32 without losing data at high speed

Format/reformat NTFS to FAT32 which is larger than 32GB

Support NTFS partition with the maximum capacity of 2TB

All operations are on the basis of ensuring data security

Break the 32GB/1TB size limitation on FAT32 formatting or conversion

Format/reformat NTFS to FAT32 partition which is larger than 32GB, 1TB

Automatically and fast decompress the compressed files featured with NTFS

Support converts NTFS on the RAID and dynamic volumes

Updates: official site does not provide any info about changes in this version